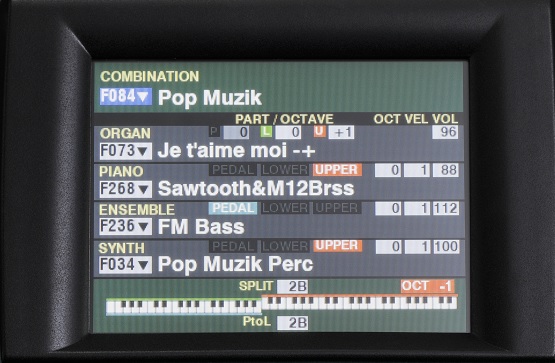 giving the player essential information on the instrument instantly.

• The SK PRO is equipped with FOUR (4) Sound Engines which can be used separately or in any combination. All samples are at a higher resolution than the previous SK-series. 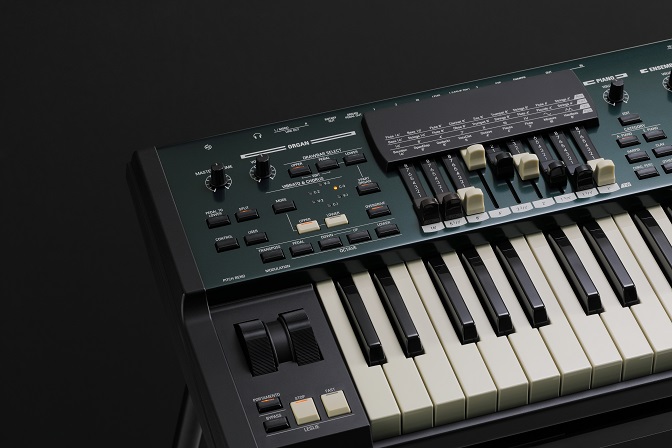 • The newly developed Virtual Multi-Contact system replicates the keyboard performance of a vintage Hammond Organ, allowing the player to experience the distinctive Hammond "feel" in every detail. For even greater versatility, our optional Hammond MIDI Pedalboards such as XPK-130G, XPK-200G or XPK-200GL can trigger this Virtual Multi-Contact system for the pedal sound.

• A special system emulating the Matching Transformer of a vintage Hammond Organ adds striking authenticity to the Hammond Drawbar tones.

• In addition to the great Drawbar sounds, the SK PRO also models the Italian, British and Japanese transistorized Combo Organs which have come back into style in today's music. 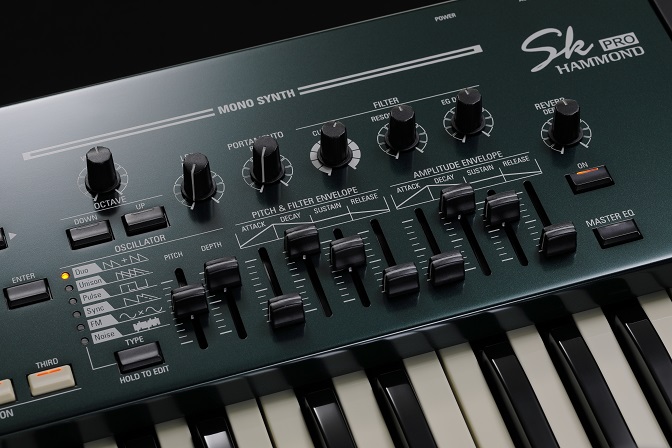 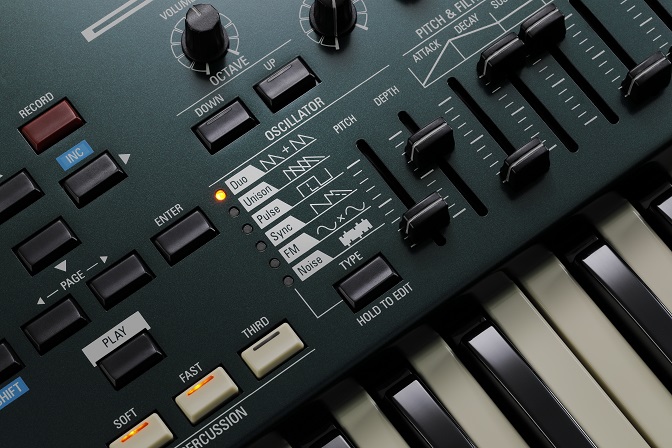 • Six (6) different Oscillator configurations are provided, as well as controls for Filter and Amplitude allowing the player to create sounds in real-time just as on a classic analog synth. 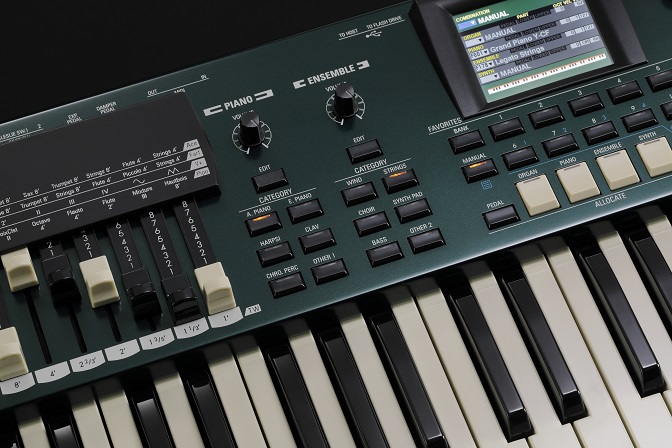 NEW on SK PRO:
All Piano / Ensemble voices can be FULLY EDITED. Sample choice, EG, Filter, LFO and other parameters are now in your control and can be saved as a Patch.

• The SK PRO contains high-quality samples of the world's leading Grand Piano sounds, including a brand-new sample of a legendary Concert Grand Piano.

• High-definition digital voices (upgraded in resolution from previous SK models) provide a wide variety of tonal possibilities, many of them new to the SK-series . All Voices have been carefully chosen for real-world musical performance usefulness.

• Hammond's exclusive ProChord feature permits the player to re produce complex harmonies by playing a single-note melody with the right hand and chords with the left hand.

The panel of the SK PRO is an eye-catching "British Racing Green" color... 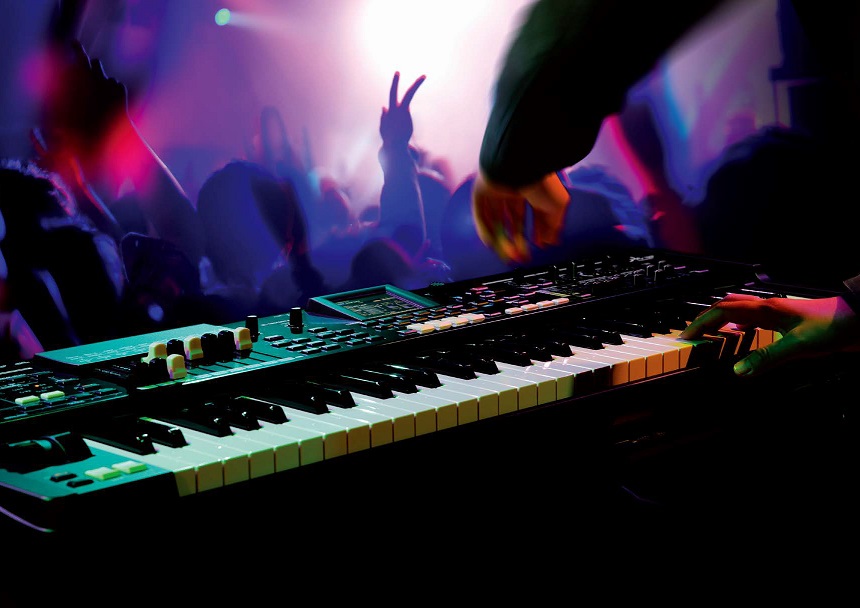 ...that will blend in any environment. 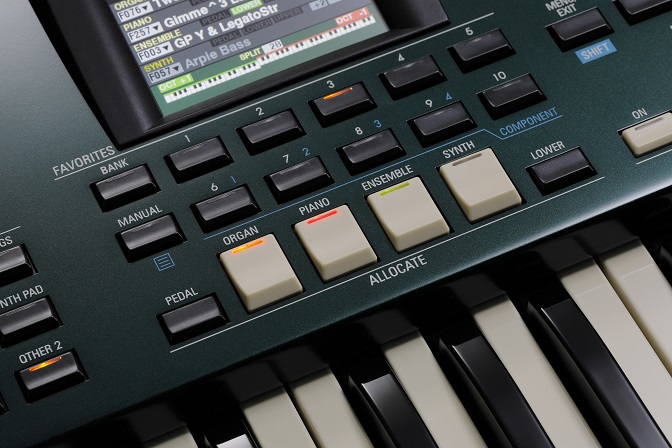 The basic voice unit of the SK PRO is a "Patch", which stores the source sound or sounds and all programming for each sound.

There are Factory and User Patches available... 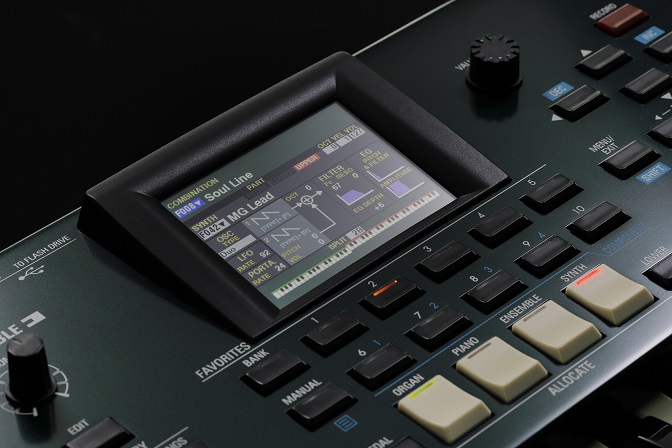 The SK PRO introduces Combinations, combining sounds ("Patches") from any or all of the four tonal sections, along with the desired performance parameters required for those sounds.

• Combinations "set the scene" for each performance, and may be changed in an instant.

• You can even assign external MIDI instruments to these Combinations.

• In conjunction with the 4 ALLOCATION buttons located in the center of the keyboard, the player can call up any part of a Combination in real-time, giving the equivalent of FOUR (4) discrete key boards.

• 200 Combinations are available (100 Factory and 100 User). Any ten (10) of these may be assigned to the F AVORITES buttons (as on previous SK instruments) for instant access. The role of the Favorites has been expanded to include Ten (10) Banks with 10 Favorites each are available, making a total of 100 Favorites easily and quickly called up. 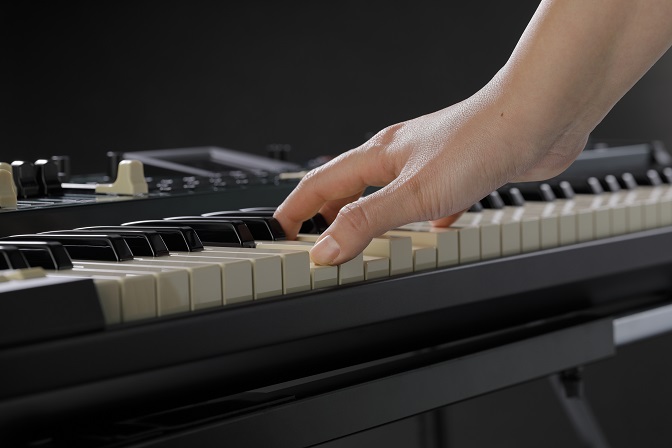 Each of the 4 Voice Sections can receive Overdrive and 2 types of comprehensive DSP Multi-Effects. 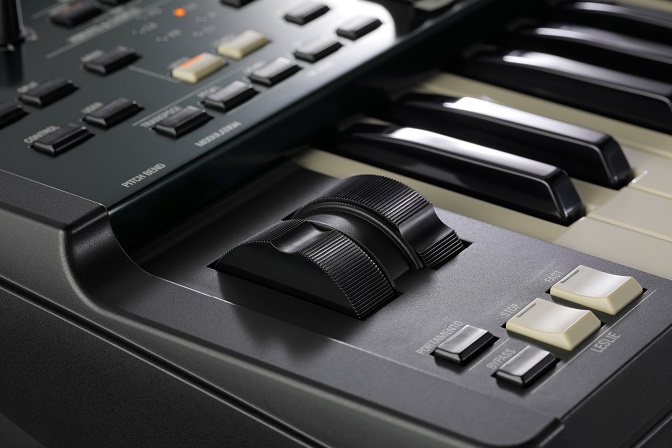 The SK PRO incorporates Pitch Bend and Modulation Wheels, giving the player the ability to add full expressiveness to the music. 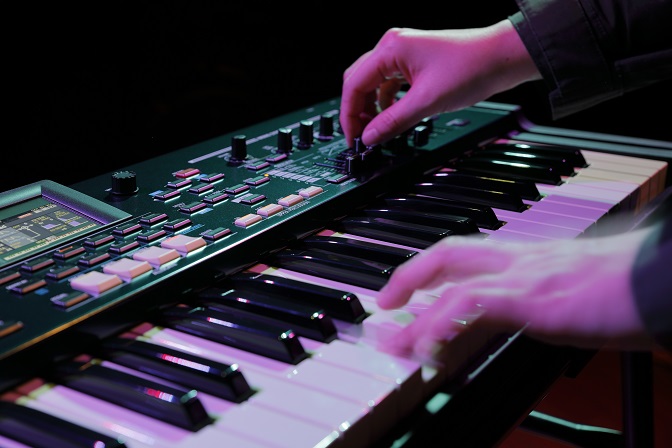 • Each Voice Section has an individual Volume Control allowing the different Sections to be balanced against each other in real time.

The SK PRO includes LINE OUT left & right jacks as well as a HEADPHONE jack and an AUX IN jack with its own volume control for connecting an external sound source such as a music player.
• In addition, individual outputs allow the assignment of the PIANO, ENSEMBLE or MONO SYNTH Sections to two separate audio outputs.
• ROTARY OUT and ORGAN PEDAL (BASS) OUT jacks are also provided. 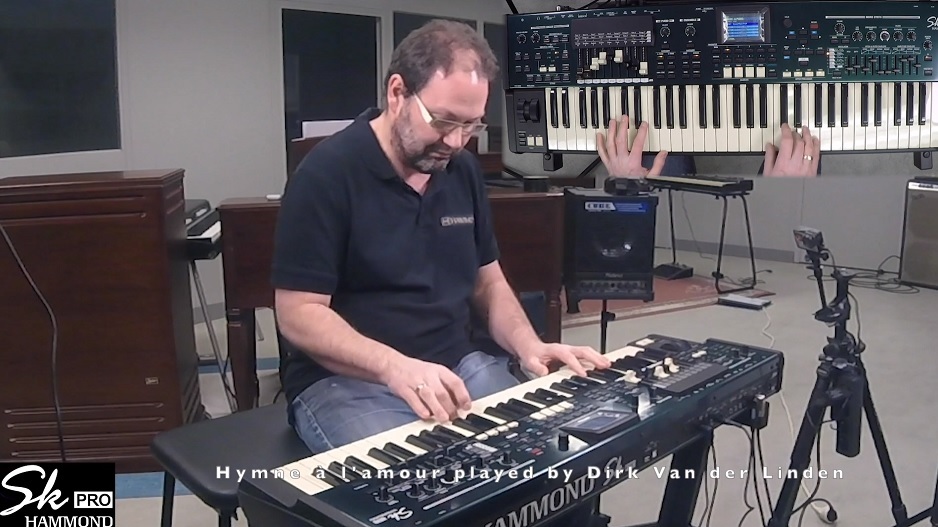 When Dirk Van der Linden first started playing the Hammond organ, an instrument which is gaining full attention again, his biggest inspiration was Jimmy Smith. With his own compositions and influenced by the blues organist N° 1 - Jimmy McGriff, Dirk Van der Linden created the "real" sound he sought after!

In January 2004, he recorded his second Hammond-CD at the "Route 66" in La Palme, South of France. This cd is an extension of the "Hammond Pressure", a cd he recorded in 2002 and released by "Virgin Records". This cd deserves attention on the tunes, composed and performed by Dirk Van der Linden. In summer 2004, "Funny Glasses", dedicated to Toots Thielemans, was composed and recorded by "ESTATE Records" (released in October 2004).

On this new cd, the inspiration of several US-Hammondplayers is present, with an added personal touch of Dirk Van der Linden. This cd is internationally distributed by AMG and released in the Benelux, France, Germany and Switzerland. And all the international jazz festivals will be contacted in 2005.

Beside playing the Hammondorgan, Dirk Van der Linden plays guitar, piano and bass, which gives him the opportunity to feel and to explore the full spectrum of jazz colors!

Born in 1969, he started playing the guitar at six and at twelve he played his first gigs in the local jazz scene - the beginning of a impressive international jazz career. In 1989 he became a professional musician, playing with the likes of Toots Thielemans, Clark Terry,Teddy Edwards, Deborah Brown, Dan Barrett, Gianni Basso, Leroy Jones and many others.

Together with Mike Carr he played on several festivals as a two Hammond act. 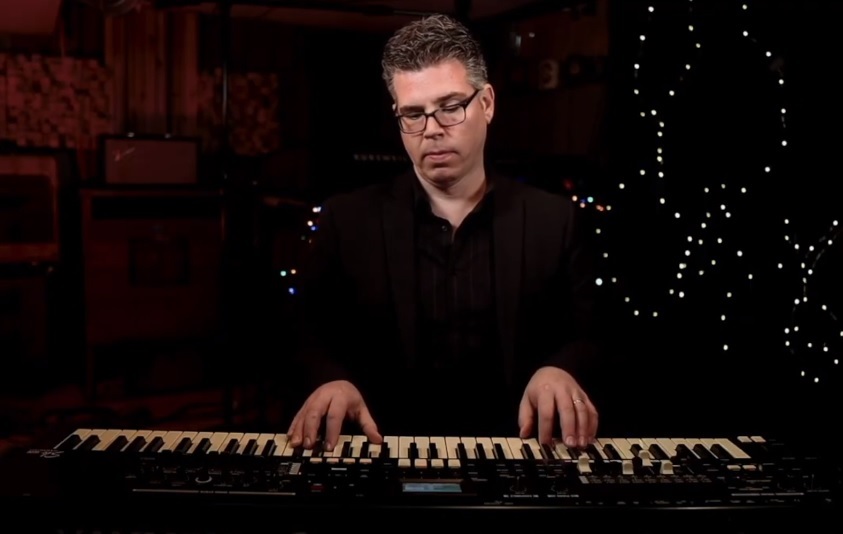 Jim Alfredson comes from a musical family. His father earned a living as a professional musician for many years and encouraged Jim's talents from a very young age. Some of Jim's earliest memories include pulling on the drawbars of his father's Hammond B-3 at the age of four.

Jim began writing his own songs at the age of eight on the organ. A score of synthesizers and multitrack machines followed until he came full circle at age sixteen and began lusting after the sound of the Hammond organ. Jim has immersed himself in the study of the mighty Hammond B-3 ever since, dedicated to uncovering new directions within the great tradition of the instrument. His group, 'Organissimo' is regarded as a cutting edge trio, enjoying rave reviews from critics and the public alike. He is also the former organist and musical director of the highly successful, award-winning rhythm & blues band Root Doctor (1999 – 2009)

"The SK series fit in so many different musical situations, they should've called it the Hammond 'Multi-Tool'. Need acoustic piano? It's there. Electric piano? Got that, too. Clav, horns, strings, even accordions All there at the press of a button. And of course since it's a Hammond, the organ is the real deal" 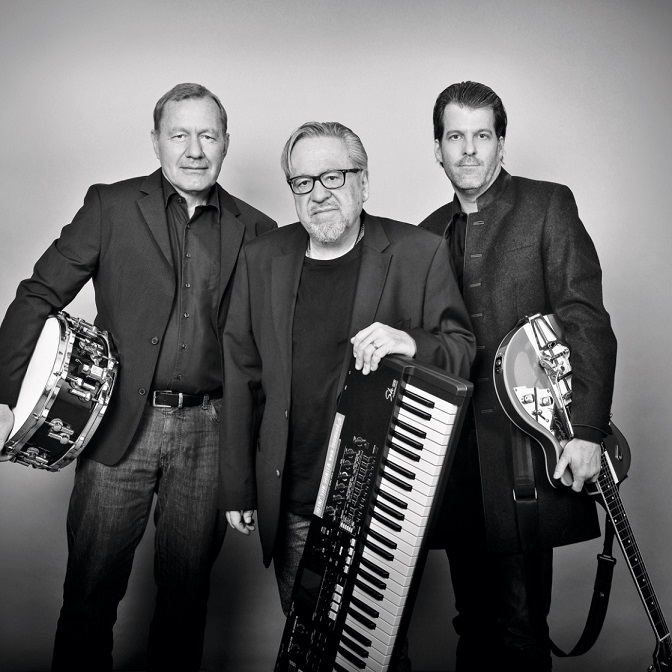 Triophonix is a live band from the 'Berner Oberland'. Three musicians, all live, everything real - because they are too!

The band consists of :

A couple of songs performed by Triophonix and available as movies are:
- Mister five percent
- Illusions 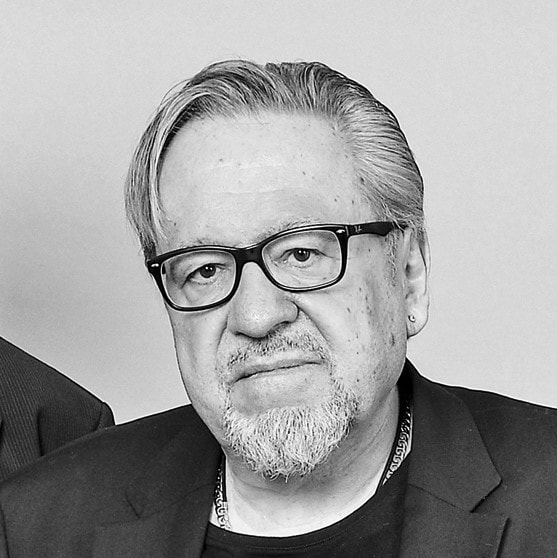 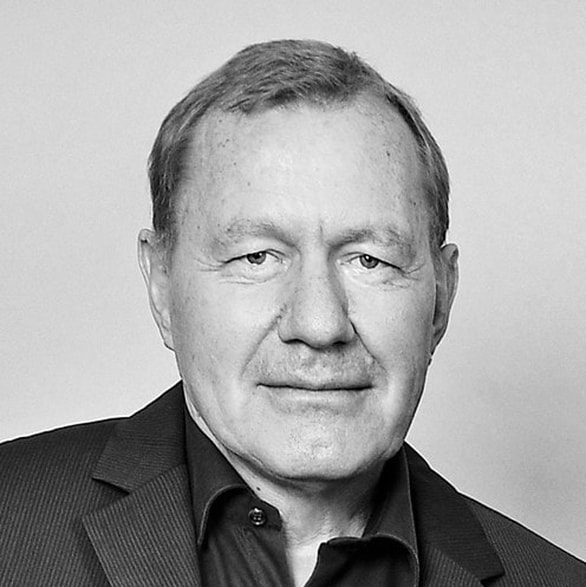 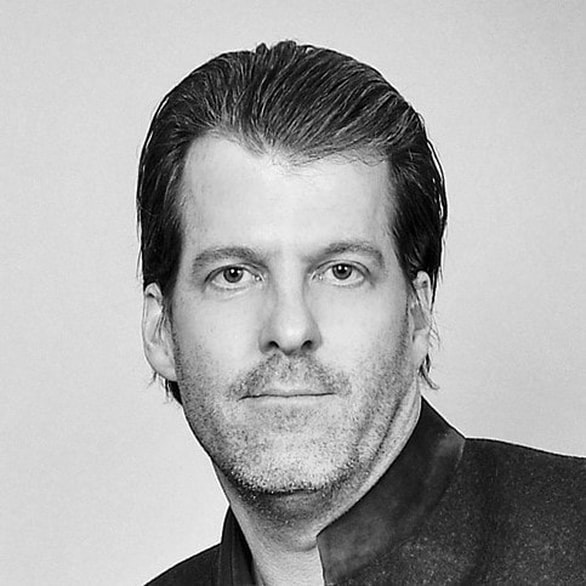 "They're a trio that's as loud as a whole band, a trio that plays everything live without the computer numbing the musicians."

Wherever your music takes you - We'll meet you there !
Hammond’s SK-series Stage Keyboards set the standard for lightweight, stage keyboards with just the right mix of features for any player, regardless of genre.
Hammond's all-new SK PRO advances and refines the "SK" concept,
bringing unprecedented tonal versatility and functionality combined with logical real-time controls.